Attending the International Balloon Fiesta in Albuquerque, New Mexico has been on Jim’s and my bucket list for a while. We’ve heard nothing but good things about this event. So when the opportunity to attend arose (no pun intended!) via our local Airstream club, we were on board! Registration was back in January so we’d been looking forward to this October event all year.

We started the trip with two nights at the Mojave National Preserve, one of our favorite desert campsites. Weather was perfect, 70’s, and there were six Airstreamers from the club with us plus a member of the Old Town Sidewalk Astronomers group. Both nights Jim and a couple of others put out their telescopes to enjoy the milky way and great star viewing that the Mojave is known for.

We had made reservations some months ago for the Mitchell Caverns, the only limestone caves in the CA State Park system. The caverns had been closed for about seven years due to the CA state budget issues and much needed infrastructure upgrades. They opened in November 2017.  The ranger told us that while they were closed, the visitor center and surrounding buildings had been vandalized. Thankfully, the caverns were relatively unharmed. The only way to see the caverns is on a ranger led tour, which was very informative. On our way to the caverns, the ranger explained the history and the surrounding terrain. Entrance area is 4300 feet elevation.  When we crossed a bridge to reach the caverns, a rocky squirrel crossed the bridge while all of us stepped aside to watch. This squirrel is unique in that it resides in few areas and is one of the few desert animals that can take down a rattlesnake. Once it kills the rattlesnake and eats it, it will take it the snake’s scent glands and smear it on its body to repel predators and other snakes. Pretty amazing! The caverns themselves have quite a variety of rock growth as well as stalactites and stalagmites. One of the interesting formations was the popcorn formation. There are only 11 caverns in the word that have those so are very rare. The deepest part of the cavern that we went was 300 feet underground. The last room of the cavern was very large and used by Indian tribal shamans. All in all it was a very worthwhile visit and the ranger made the visit very interesting.

Our next stop was at the Grand Canyon and our base was the Grand Canyon Railway RV park in Williams, AZ.  It is a quaint town proud of being part of Route 66. We took the Grand Railway train into the Grand Canyon. The train ride was slow, a bit corny with the strolling musicians, but fun. 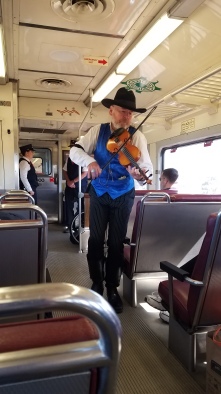 Our tour guide, Amber Rose, was great! If you ever take this train, we’d recommend requesting the car that has her because she is very knowledgeable and funny. She also gave suggestions about what to see and do and what to avoid given the limited amount of time we had once arriving at the Grand Canyon Village, which was about 3 hours. That time went very quickly between stopping to enjoy the majestic canyon views, the major sights (Hopi House, El Tovar Hotel, Lookout Studio, Bright Angel Lodge and Kolb Studio) and all of the gift shops. We were very fortunate to see some Bighorn sheep along the cliffs of the Grand Canyon. When Jim and I were last here about 15 years ago, we saw California Condors flying around but this time we did not see any. We asked one of the rangers where they were and we were told the time we saw them they had just been recently introduced into the area. They are still in the Grand Canyon, but over time they have chosen to stay away from areas that have a lot of people, probably a good idea on their part!

Our second day at the Grand Canyon we explored on our own and started by driving over to the Desert View side, which we had never been on before. We started at the Desert View Watchtower which was an interesting structure designed by Mary Colter. It looked almost medieval and had a great lookout of the canyon. The rest of our day was spent stopping at various vista points. We ended our day catching a tram from Grand Canyon Village to Yaki Point. Then we hiked around a bit, stopping multiple times enjoying the beautiful canyon views. We took a lot of pictures of this gorgeous and wondrous place…..hard to narrow them down to just a few.  The Grand Canyon and all of our national parks are unique treasures that really need to be preserved for our current and future generations.

On our way to Albuquerque, we stopped by the El Malpais National Monument. It is a geological landscape created by ancient volcanic activity, popular for hiking & permit-only caving. They have a very nice visitor center with great views of the monument.

Our next long stop was Albuquerque, NM for the balloon fiesta! People in the Airstream groups met up for one night at a campground on the outskirts of Albuquerque. The following morning we all lined up then proceeded into the Balloon Fiesta Fairgrounds so that we were able to camp together in a group.

Lined up and ready for the go ahead to head out!

Onward and forward to the Balloon Fiesta fairgrounds

This was arranged by Ken, from the New Mexico Balloon Fiesta Airstream Rally group. He and his group also arranged a catered New Mexico dinner on our first evening at the Balloon Fiesta Fairgrounds and a potluck with a roasted pig another evening. During our first evening, he gave a talk explaining how the entire event works, which was much appreciated by Balloon Fiesta newbies like ourselves since he and his group have been doing this for at least 10 years. We were told that we should get up early, before dawn, at least one morning during our stay at the fiesta, in order to watch the Dawn Patrol take off and shortly thereafter is the morning glow. Dawn Patrol is when few selected balloons will launch before dawn and fly until it is light enough to see landing sites. They will also have an early idea of wind speeds and directions at different altitudes, which will help subsequent balloonists for the Mass Ascension. Jim was up early and out the door before dawn to watch the events. My sister and I were about 30 minutes behind him. It is a beautiful sight watching the balloons float in the sky while it is still dark, illuminating as flames from burners fill the balloons with hot air. We were surprised how many people were out and about before sunrise. The balloons take off from the grass fairground and there are a number of food and merchandise vendors on the perimeter. My sister and I stood in line for a while at one of the food vendors to get some coffee and a New Mexico breakfast burrito. That hot burrito warmed us up since it was pretty chilly that early in the morning! Because a thick layer of fog came, there was not a mass ascension that first day, so we headed into old town Albuquerque to check out the sights and grab some lunch.

That evening, back at our campground, we watched The Balloon Glows, which is when all the balloons fire their burners and light up at the same time. It was stunning!

After the glows, there were skydivers who jumped out of the plane with pyrotechnics…basically fireworks attached to their legs. As they were descending, fireworks were going off….insane but quite a spectacle! When the skydivers got closer to the ground, their entire bodies lit up a solid color like they were day-glo! Lastly there was a wonderful firework show, which was spectacular, like it was the 4th of July. 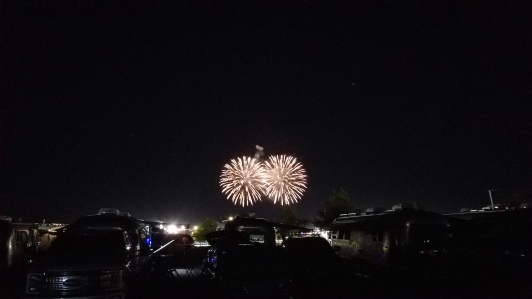 The following morning the forecast was for clear weather. Jim headed out early again while my sister and I had a slower start. From our trailer, we watched some of the balloons take off then made our way down to the balloon field to get close and watch the rest take off. We enjoyed the variety of shapes and colors!

That afternoon we headed over to the Balloon Museum, which was next to the field. The museum was very interesting and had the history of all types of balloons. We ended up spending several hours there and if you are ever in the area, we’d recommend that it is a worthwhile visit. That evening we enjoyed the fireworks show and departed the following morning. 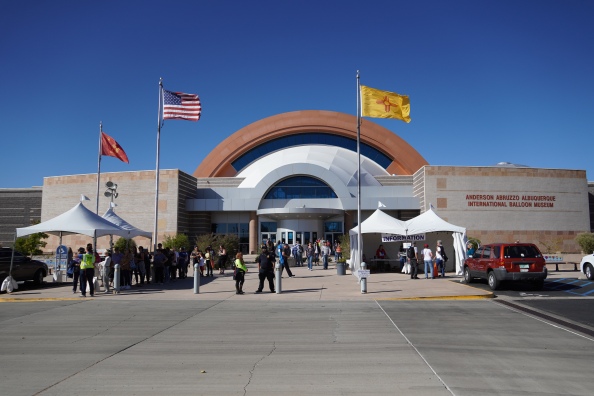 On our return trip home, we stopped the Petrified Forest National Park in Arizona. We drove through the Painted Desert section, which was beautiful. We then drove through and made a number of stops in the Petrified Forest, which had several types of rock formations as well as a couple of stops (Puerco Pueblo and Newspaper Rock) that had petroglyphs. The rock formations are beautiful, the petroglyphs and petrified wood are inspiring considering how old they are. This park was another worthwhile stop that we wish that we had more time to explore and would like to return to, but it was time to proceed home.

All in all it was a fun trip! Always great to visit our national parks and monuments. Experiencing the balloon fiesta was magical and fun. I cannot remember attending an event where there were so many smiles from all age groups, something I hope we can experience again!