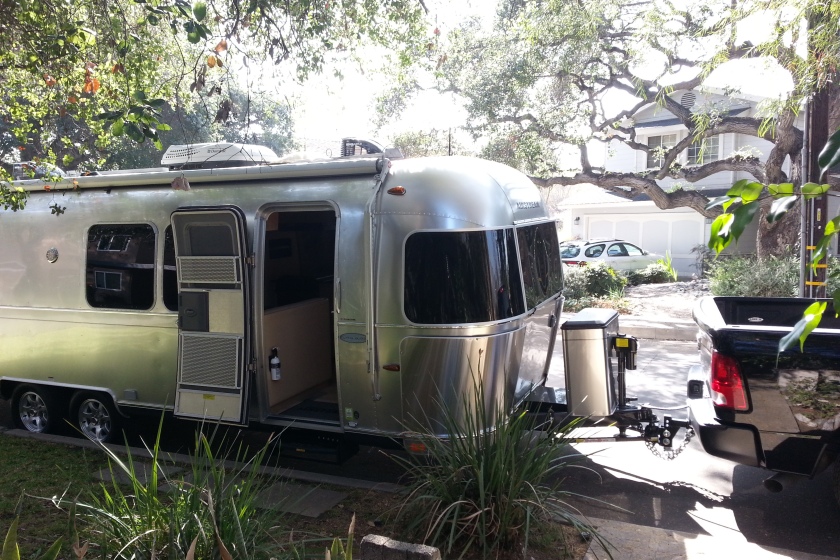 Prior to 2013, when we went camping, we stayed in a tent. That was just fine until we started noticing just how hard the ground had become compared to a few years earlier and how much more difficult it was getting into and out of sleeping bags. That’s when I suggested to my wife …

that we look at travel trailers, Airstreams in particular. I’m not sure my wife had ever heard of Airstreams.

There is a dealer near to us, Airstream Los Angeles, so we trekked over there and browsed. We had decided we didn’t need a large trailer so we looked at the Bambi models. Bambi’s are the single axle models that range from 16′ to 22′. I don’t know what we were thinking because our daughter and the dogs travel with us. Then we decided, after reading some blogs, that a dual axle might be better since they track better behind a tow vehicle. Also, since there would be four tires, it made sense to us that we might have more time to pull over safely if one tire went flat while towing. That decision put us in the 23′ and above models.

After the initial visit to the Airstream dealer for a “look”, we decided to go to a few RV shows so we could check out other brands. There are some really nice floor plans and options being offered by other manufacturers, for a lot less money. Some were tempting, but to us, there was a difference in quality and the other brands didn’t hold their resale value nearly as well. That’s just our opinion. And, with Airstreams, there’s that “they look so cool” factor.

In an attempt to save some money, we decided to look for a used Safari model that was at least 23′ with a rear bedroom. Most campsites are back in, so we decided we wanted the bedroom away from the street to reduce noise while we slept. That dictated a rear bedroom floor plan. After 1 year of looking and not finding exactly what we wanted, we decided to go to Airstream Orange County to take a “look” at their inventory. My wife and I agreed that we were going to just take a “look”. Well, we looked at various models and really liked the 28′ Flying Cloud. We sat down with the product specialist and sales manager to just briefly talk about it. I didn’t even notice the hook catch in my wife’s jaw or her being reeled in but it happened. When I said “what do you think”, expecting her to say “let’s think about it” so we’d have a little more negotiation leverage, she said “let’s get it!”…sigh. A few days later it was sitting in front of our house. I will say that Ira Cohen (sales manager), Paul Zukow (product specialist) and Danny Gallindo (service manager) are all great guys that go out of their way to take care of you.

So there you have it. That’s how we got our trailer. Here’s a couple of pictures right after we bought it. 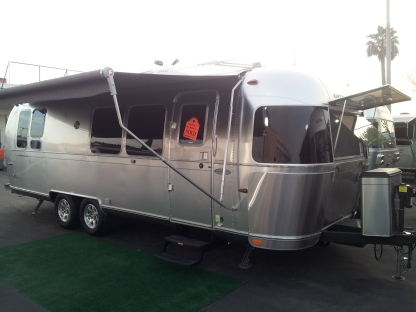 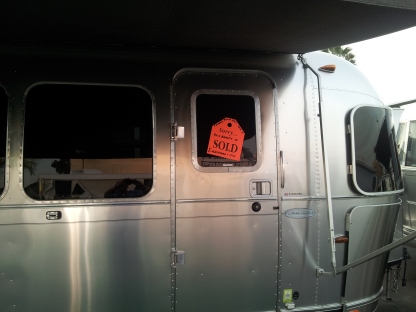 *** As a side note, both of us have to admit that there was one trailer that was without a doubt the “coolest” of all trailers we looked at. It’s the Bowlus Road Chief. Problem is it’s really expensive, small and only has resources for maybe 2 days of dry camping. It is absolutely stunning if you have the money, there’s only one or two campers and if you only go to full hookup campsites. Here’s a link to their website if you want to see one: Bowlus Road Chief