In all my years of living in California, I had never been to Yosemite and Jim had not been there for a number of years.  I have always wanted to go but heard it gets congested, so that had deterred me. We both were really looking forward to camping there.  Since we were going in September, given that a lot of kids are back in school, we were hoping it would not be as crowded.

Today was the day we left Jackson for Yosemite. The drive on highway 120 was beautiful: scenic country roads, driving by ranches and horse farms though there were some narrow roads. On our way into Yosemite from the west highway 120 entrance, we could see several firefighter helicopters putting out a fire. It was a step ascent into Yosemite. We finally arrived to our destination, Crane Flat campground. The campsites are very uneven with soft dirt so rather ironic the campground name has “Flat” in it! Jim had to use all of his resources to secure the trailer’s wheels in the soft dirt as well as level it as much as possible.

In spite of that challenge, it was a pretty campground with pine trees everywhere.  Once we setup camp, we went for a drive on Tioga Road. There were so many scenic spots and we stopped at several. One especially memorable was a pond, which looked like a postcard.

Given that basically we had two full days in Yosemite, it was a bit tough to decide what to see, especially since it takes a while to get to any “must-see” site. Mariposa Grove was closed for a restoration project (scheduled to re-open summer 2017). We decided to see Glacier Point the first day and Yosemite Valley the second day. The drive to Glacier Point was beautiful. Though there were a lot of trees everywhere, it seemed about 1/6 were dead from the bark beetle and/or the drought. We stopped by a meadow on the way up to Glacier Point. 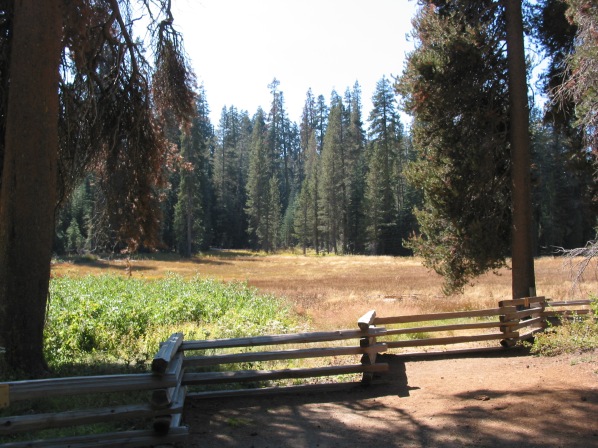 It looked picture perfect! The road into Glacier Point was pretty narrow. There were signs posted saying if your RV or trailer was over a certain length to turn back since they were not allowed. I understood why once we got to the part of the road that narrowed. The view from Glacier Point was commanding and nothing less than spectactular! I was in awe. It was so majestic to see Half Dome, Yosemite Valley and Yosemite Falls in one sweeping view. Now I understood why everyone who has gone to Yellowstone raves about it. We really are lucky to have our National Parks!

After Glacier Point, we drove back to the main road and found a spot for a nice view, similar to the infamous Wawona Tunnel View, where you can see glimpses of El Capitan and Half Dome.

We then stopped by one end of Yosemite Valley to go for a hike to see Bridalveil Falls. The falls did not have much water so not sure if that was due to the drought or the time of year.  They were still beautiful and rather majestic falling from the high granite cliffs. We had beautiful views of El Capitan while hiking on a trail that went alongside Southern Drive in Yosemite Valley. We could not help but take a lot of pictures of the trails, surrounding granite walls and of course, the mesmerizing El Capitan!

It would be dusk soon so we reluctantly cut our hike short so we could head back to our campground. I did not want to drive the narrow roads, some with high cliffs, in the dark.

We drove to Yosemite Valley and since we brought our bikes, we decided to take advantage of the great bike trail they have. It goes for several miles and is for bikes/pedestrians only. First we walked around the village, explored the visitor center, museum, some shops and had lunch. The bike ride was beautiful and it was so nice to not to worry about cars. We stopped by Yosemite Falls then made several stops by the Merced River to enjoy the beautiful scenery.

We stopped by a quaint looking older building, The Yosemite Conservation Heritage Center (formerly the LeConte Memorial Lodge), which is a National Historic Landmark, and was built by Sierra Club volunteers in 1903-04. It is the second oldest building in Yosemite Valley.

Our bike ride ended sooner than planned when my bike got a flat.  So we had to walk rest of the way back to the lot where our truck was parked. It was still a pretty and scenic walk!

I will say, in exploring Yosemite, it was interesting how a number of the visitors were Europeans. In fact, next to our campsite was a young European couple, with a baby, who had rented a RV to enjoy the Yosemite experience. Kudos to them for being adventurous! Finally the day came that we had to leave Yosemite for home. We did not want to leave this beautiful place. Definitely must come back to this beautiful National Park to explore the other areas (Hetch Hetchy, Tuolumne Grove, Tuolumne Meadows, etc.)! The drive out of the park on highway 140 was scenic, especially since part of it followed the Merced River.  Yosemite was a perfect way to end our trip to this area of California!