If you didn’t get to see the total eclipse on August 21st you really missed out! A couple of us towed our Airstreams from Southern California to Rigby, Idaho (almost on the centerline of totality) to see it and the eclipse was amazing! We’d mapped out the trip and made reservations starting in November of 2016. That was almost too late as a lot of places were already sold out or had jacked up the prices to an almost unreasonable amount.

We stayed at the Aspen Grove Inn at Heise Bridge in Rigby, Idaho and it couldn’t have been much better. The new owners, Sharon and Steve Parry, did all they could to make sure everyone had a great time and I’m sure everyone did!

This trip, we traveled with friends Carol and Phil, who also own an Airstream. The drive to Rigby was uneventful with overnight stops in Las Vegas, Beaver and Brigham, Utah. Nice campgrounds but nothing to write home about. We arrived at the Aspen Grove Inn on Friday August 18th. The plan was to get there a few days early to avoid the anticipated crush of people arriving for the eclipse.

The campground was clean with plenty of space between campsites. The restroom was spotless and nicely decorated. A good-sized pond is in the middle of the property with free paddleboats and fishing available to guests. For people that don’t have an RV, there are cute cabins for rent. As I said earlier, they didn’t jack up their prices for the eclipse. Sharon, the owner, told me over the phone that it just wasn’t right to take advantage of people like that. I have to say that integrity like that is hard to find these days. We only paid $22 a night, which is a bargain at most any campground, anytime. Thank you Sharon. If you visit the area, consider staying here, I don’t think you will be disappointed. Here’s a link to their website:  Aspen Grove Inn

We spent the next 2 days, Saturday and Sunday, exploring the area. Saturday we hiked along the Cress Creek Trail next to the Snake River with our fellow Airstreamers Carol and Phil. Part of the trail took us high up a hillside and gave us a great landscape view. Idaho is a beautiful state. 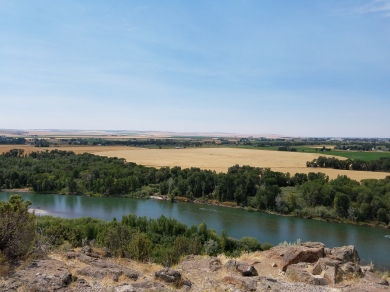 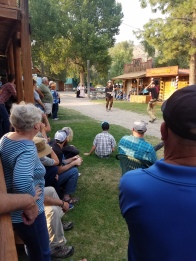 Later that evening, the four of us went to an Old West dinner show at the Mountain River Ranch, across the street. It was a lot of fun. They started things off with a gunslinger shootout, real guns but fake bullets or so they said, that took place in an old fashioned Western town. Of course the good-guy Sheriff saved the day and the bad guys bit the dust.

After the shootout, we were all loaded into horse drawn wagons and taken to a huge barn out in a meadow for a BBQ dinner/show. It was a nice ride through some very scenic ranch property. There was plenty of good BBQ and if you went away hungry it was your own fault. The Dinner show was funny and the young performers were very good, some playing multiple instruments. Saturday was a good and busy day.

Sunday was also busy. In the morning Alexandra, Phil and I took another hike by the Snake River on a trail that skirts the riverbank. This is one big, powerful river. We saw a lot of fly fishermen in boats and people with kids and dogs doing things all along the rivers edge.

Sunday afternoon, we all participated in an Aspen Inn Grove buffalo chip golf contest. We each had a Frisbee that looked like a buffalo chip, which we used to play a round of Frisbee golf on a course that weaved all through the entire Aspen Grove Inn property. We didn’t win. We didn’t even come close but we had fun flinging those things around. We brought ours home although I don’t know what we are going to do with them. They are heavy and don’t fly particularly well, plus they look like s**t, uh, a buffalo chip.

Before any of that took place, Alexandra and I setup a table of space mission related stickers and certified solar glasses that were free to anyone who wanted them. I had some space shuttle/space station mission stickers and a friend of ours, Jane Houston Jones who works at JPL in Pasadena, provided some current project mission stickers and informative printouts for the taking. All materials had interesting facts printed on them, so hopefully some folks learned something new and interest in our space programs grew a little. It was interesting to see that adults were taking more stickers than the kids. I thought it might be the other way around. Jane creates very interesting monthly podcasts that talk about the night sky. Be sure to check them out at:  Jane Houston Jones NASA/JPL Podcasts

Dr. James Fillmore began the afternoon with a talk that explained what has to happen for an eclipse to take place, some things to look for during an eclipse and how to view an eclipse safely. Dr. Fillmore has published many technical papers relating to the study of galaxies for many years. His professional background includes the Division of Physics, Mathematics, and Astronomy, California Institute of Technology, Pasadena, California. There is a lot I could write about him, but I’ll shorten it to “he knows his stuff”. After his talk, he answered questions from the audience. This was a great introduction to the eclipse for all the campground guests.

After the eclipse talk, we all enjoyed all-you-could-eat Dickey’s BBQ and a music/comedy show. One of the performers was Steve Parry (Aspen Grove co-owner) who is pictured on the left. 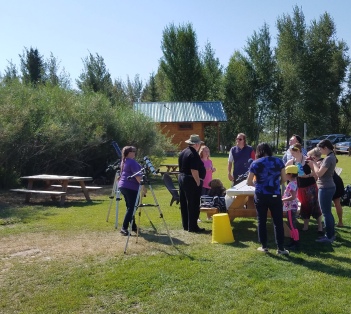 We got up fairly early, ate breakfast and dropped into look at the moon moving in front of the sun mode, viewing through eclipse glasses of course, and waited for the big event! A little distance from us, some members of the Los Angeles Astronomical Society had set up solar telescopes and shared views/information with campground guests right up to the time of the eclipse and for some time afterwards. They were fun and passed on some good eclipse information as well as viewing tips.

Then it was “Show Time!” The weather was perfect and the eclipse itself was indescribable, although I’ll make an attempt.

But first, one noticeable illusion both before and after an eclipse is a pinhole camera effect. Basically, sunrays though tree leaves work to make a solar image on the ground below or blinds on a window will change a square opening into a round sun on the wall or table. You can safely watch the moon move across the sun by looking at these images without eclipse glasses. Here are a couple of pictures of the pinhole camera effect we took in our Airstream and our friend’s Airstream, as the eclipse got near. As you can see, the moon was partially covering the sun: 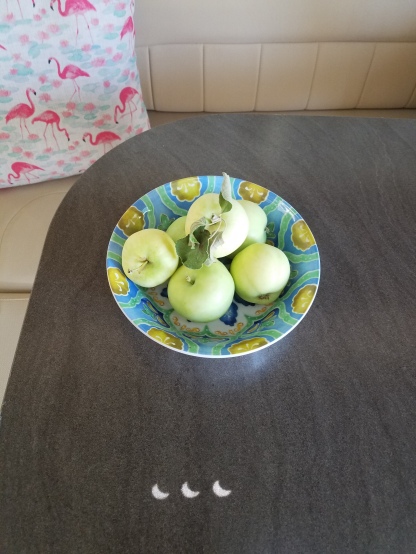 Now, back to the eclipse. As the moon moved in front of the sun and was just about to totally block it, I could hear people from all over the campground start to make some noise. As it got darker and darker, it got cooler and cooler. Some stars came into view as did planets Jupiter, Mercury, Mars and Venus. At the moment of totality, people gasped and yelled loudly. Some lights that were obviously on a sensor came on in the campground. I didn’t hear one bird chirp. Time to take off the eclipse glasses. It was an amazing spectacle. It’s easy to see why this type of event frightened people in ancient times and made them think bad things were about to happen. There was, after all, a menacing black orb in the sky surrounded by a fiery halo. Looking directly at a total eclipse is like nothing else I’ve ever seen. Pictures and descriptions are inadequate. You have to see one to understand what I’m talking about. After 2 plus minutes, the diamond ring briefly appeared, prompting more yells from viewers and signaling the beginning of the end for this eclipse. Time to put the eclipse glasses back on. The diamond ring effect as described on a NASA website: “The diamond-ring effect occurred at the beginning and end of totality during a total solar eclipse. As the last bits of sunlight pass through the valleys on the moon’s limb, and the faint corona around the Sun is just becoming visible, it looks like a ring with glittering diamonds on it.” Here is a video my wife took on her cell phone during the eclipse. It made the sky appear lighter than it actually was. It’s not great quality, almost no detail at all, but gives some idea of what happened. If you listen closely, you can hear her react to totality at the end.

And then it was over. It was still neat to watch the moon uncovering the sun, but totality was a hard act to follow and enthusiasm started to ebb away. Already folks, including us, were talking about seeing the next total eclipse that goes across the US in 7 years. We plan to go see it for sure. Google the 2024 total eclipse for information. Here’s a map for reference:

After the eclipse, Alexandra and I took a walk down a road near the campground to the Snake River where part of the river is split off into a feeder canal for farm irrigation. While there we saw an Osprey family of three that had taken up residence in an abandoned Eagle’s nest. It was a memorable day. 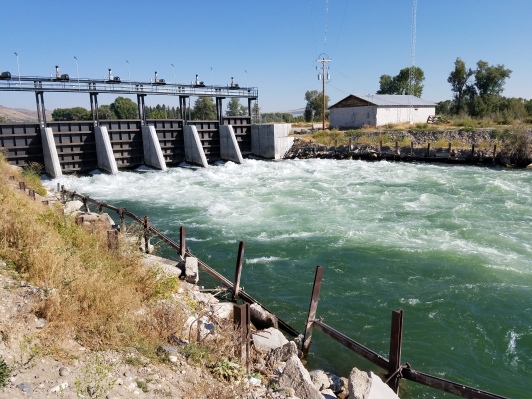 The next day we packed up and left to start the next phase of our adventure. This next part of our trip took us to Yellowstone NP, Grand Teton NP, Craters of the Moon NM and Preserve and ends at Bryce Canyon NP. As time permits, we’ll add those travel updates to our blog.

Again, thanks to Sharon and Steve Parry, owners of Aspen Grove Inn, for everything they did to make our eclipse stay a great experience!

One thought on “Alexandra and Jim’s BIG Eclipse Adventure!”