I built a bike rack in the back of our truck.

My wife and I wanted to take our bikes with us when camping, but we had no good way to carry them. It’s a little crude looking but it works and it didn’t cost that much, if you don’t count the time it took me to build it. 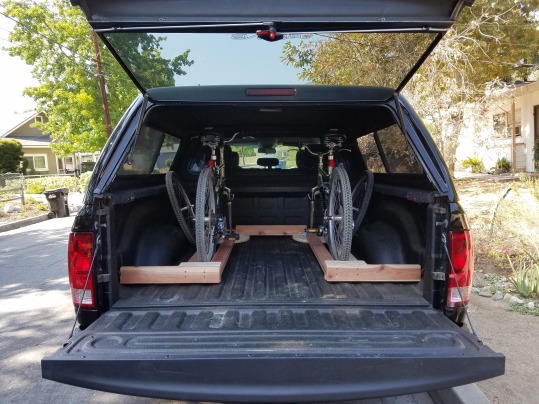 We didn’t want a bike rack on the front of the truck, on the roof of the truck or on the back of our travel trailer because of the road gunk that would accumulate on the bikes. I couldn’t just load them into the bed of the truck because we have a shell on the truck bed that restricts the height of anything we put back there. If, however, the front wheels of the bikes are removed, the bikes can be loaded (just barely), upright, under the shell in the bed of the truck. So this is what I came up with to do just that.

It’s a very simple design that’s made mostly out of 2×4’s. After taking off the bikes front tires, the back tires go between 2 2×4’s and the forks load onto a fork mounts that I screwed onto pieces of circular wood. The circular wood provides a nice solid, wide platform that keeps the bikes from tipping over. I screwed short 2×4 pieces on the outside front and rear ends of the racks so the bikes couldn’t slide against the side of the truck bed (and windows) and added a removable piece of wood that connects the front of the racks, in the middle, to prevent them from sliding together. I use bungee cords to hold the front wheels in place next to the bikes so they don’t roll all over the place. For a simple design, it’s very solid. I’m very proud of the fact that no Duct Tape (sometimes called Duck Tape) was used. 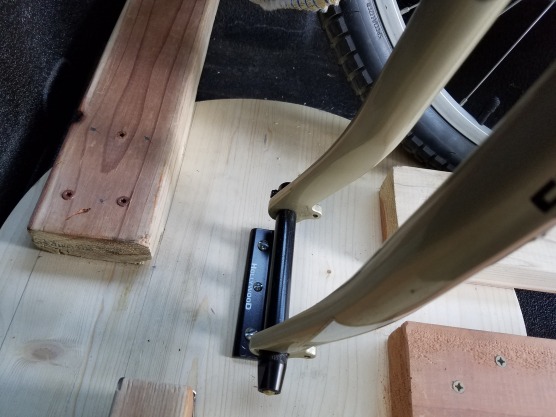 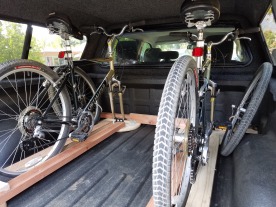 The only downside is that we loose a lot of valuable storage space. I’m still working on a good packing plan so we can pack the following with the bikes: a Weber Q BBQ and a camp stove; 2 propane tanks; a 150 psi pancake air compressor; 2 Yamaha generators and gas can; tool box; 2 small folding tables; 2 step, stepladder.

Plastic tubs full of stuff we used to put back there can’t go back there anymore. We’ll have to pack those in the trailer and probably the Weber Q BBQ also, from the looks of things. It’s all about compromise and deciding what is really needed when packing a travel trailer and tow vehicle and I’m sure we will eliminate some things we used to pack but never really used. Here is my 1st packing attempt with the bikes in the truck bed. The BBQ didn’t fit.

The first test for the bike racks was our trip to Crystal Cove (Moro campground) a few days ago. Nothing bad happened so I count that as a success. We happily biked up and down the bike trail that runs next to the coast. The next test will be a 2-week trip for an Airstream event in Jackson, California followed by a few days in Yosemite National park.

Let me know if you have done something similar and how it worked out.